Since her London Fashion Week debut in 2005, Roksanda Illincic has become one of the capital’s great fashion success stories, culminating in the opening of her first ever store on Mount Street in 2014.

Already familiar with the neighbourhood, Roksanda expressed her excitement at joining the line-up of designer names on the street, “I couldn’t resist the location and the site is beautiful. When the spot came up, it was such great timing in terms of where we were as a brand. It’s a street I have always wanted to be part of on a personal level.”

In a Grade II listed building, the brand teamed up with architect David Adjaye to retain an elegant style to the boutique, befitting of both the location and Roksanda’s feminine design aesthetic. Past the original store front though, you’ll find a truly modernist design delight. Inspired by the geometric lines used in the clothing, the marble floor is laid out in a herringbone design, while the walls are made up of concrete slabs, irregularly laid into the wall. Clothing rails zig-zag down the boutique for a very literal embodiment of the brand and Roksanda’s passion point as a graduate of architecture and applied arts. The decor is deliberately muted and industrial, allowing her other design signature, vivid bright colours, to pop against the backdrop.

The Roksanda studios, where every piece is designed, are based in East London, and the collections are made in the UK, France and Italy. Mount Street remains the only standalone Roksanda store in the world, making it a truly special London gem. 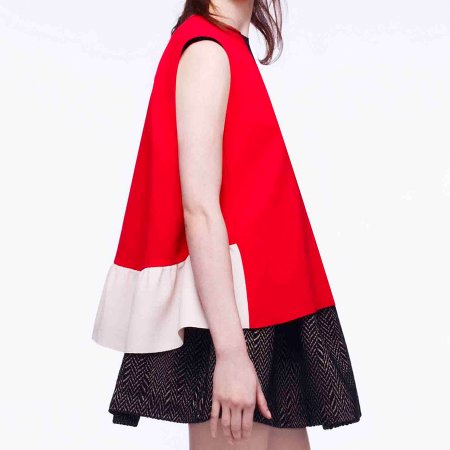 The 2,500 square-feet boutique includes its own private garden and terrace, and downstairs holds childrenswear, occasionwear, bridal, and the private shopping suite for VIP visitors. Though you can shop pieces by Roksanda at all of the capital’s major luxury department stores, the Mount Street boutique is the immersive Roksanda experience from the service, to the interiors, to the fashion available to purchase.

See more boutiques on Mount Street to find out what makes this area Bond Street’s lesser-known little brother. A shopping destination for those in the know, you won’t want to miss the opportunity to shop at some of the only UK stores for these designers, or even uncover a beautiful brand you never knew existed…