There’s nothing the Brits make better than good rainwear, and you’ll find the very best at Aquascutum on Jermyn Street. Inventors of the first waterproof fabric and the trench coat, the brand is a corner stone of British fashion and today is just as well known for their preppy ready-to-wear and accessories for men and women. In-keeping with the vibe of the area though, the Jermyn Street store is a menswear only outpost.

Aquascutum has always had a presence in Mayfair, starting life as a tailor in 1851 under John Emary. It was only two years later that he developed his waterproof textile which was inspired by the brand’s name, meaning ‘water shield’ in Latin. It was an instant hit and even King Edward VII placed an order, the start of a long relationship with the royal family, and In 1897 they received a Royal Warrant. Unrivalled in their field, they developed the trench coat style for the military, and the innovative Wyncol fabric used by Sir Edmund Hilary and his team in their ascent of Everest. As the 20th century progressed, they dressed even more high-profile names over every decade including Hollywood royalty Humphrey Bogart, Lauren Bacall, and Michael Caine, British Prime Ministers Margaret Thatcher and John Major, and Team GB in the 1996 Olympics.

It was opened in November 2016, two years after it first launched its menswear concept on the street, to expand the offering in a bigger premise. It is also one of only two stores that offer a made-to-measure service on tailoring. The process takes around six weeks and prices start from £750, inclusive of any alterations required for the final fitting. 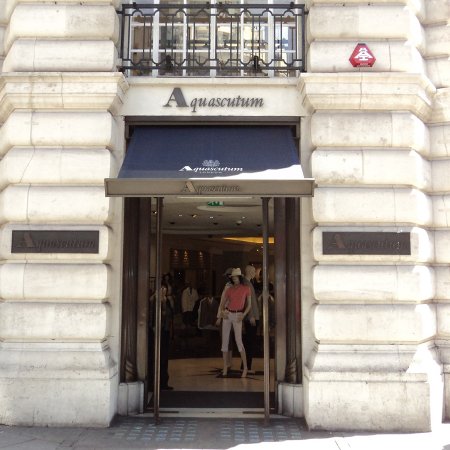 While the brand has stores in 12 countries, Jermyn Street remains their only dedicated menswear space. Spread across 2,100 square feet, the naturally bright space is furnished in light wood and soft beige textiles that perfectly complement flashes of their signature club check that you’ll find around the store.

Not finished exploring Jermyn Street yet? This quiet backstreet is full of hidden gems and time-tested family businesses you might have overlooked, from the infamous shirtmakers and menswear specialists to much more besides. Click through more shops in our directory to read about the talent, craft, and service that lies behind these doors.