Celebrities of the West End Stage Throughout the Summer 2019

From Hollywood A-Listers to renowned theatrical stars, over a dozen celebrities make appearances in London’s West End throughout the Summer of 2019. As a result, there will be multiple opportunities to catch your favourite stars in the West End in various musicals, comedies and dramas. In this article, I will be exploring such shows and their leading personalities. 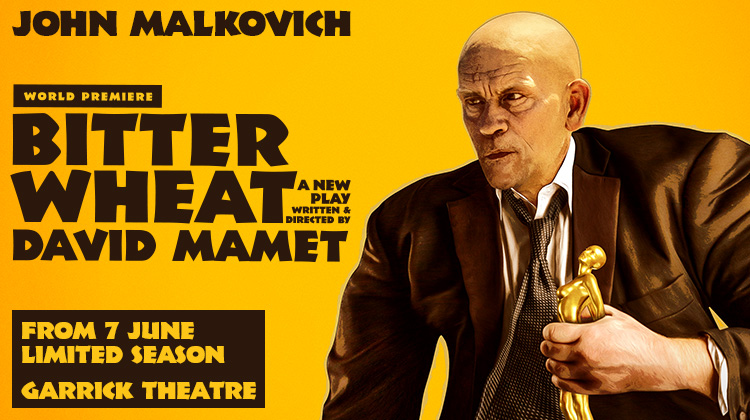 From the 7th of June all the way up until September, John Malkovich will be starring in David Mamet’s new play ‘Bitter Wheat’. Malkovich is a two-time Academy Award nominee and has appeared in more than 70 films over the span of his career, including ‘Being John Malkovich’ and ‘Of Mice and Men’. Mamet’s play Bitter Wheat sets out to tackle the topic of sexual abuse in Hollywood, whereby Malkovich portrays a shamed producer, similar to the likes of Harvey Weinstein. As a result of the play’s subject matter and talented leading actor, Bitter Wheat will no doubt be an intriguing piece of theatre. 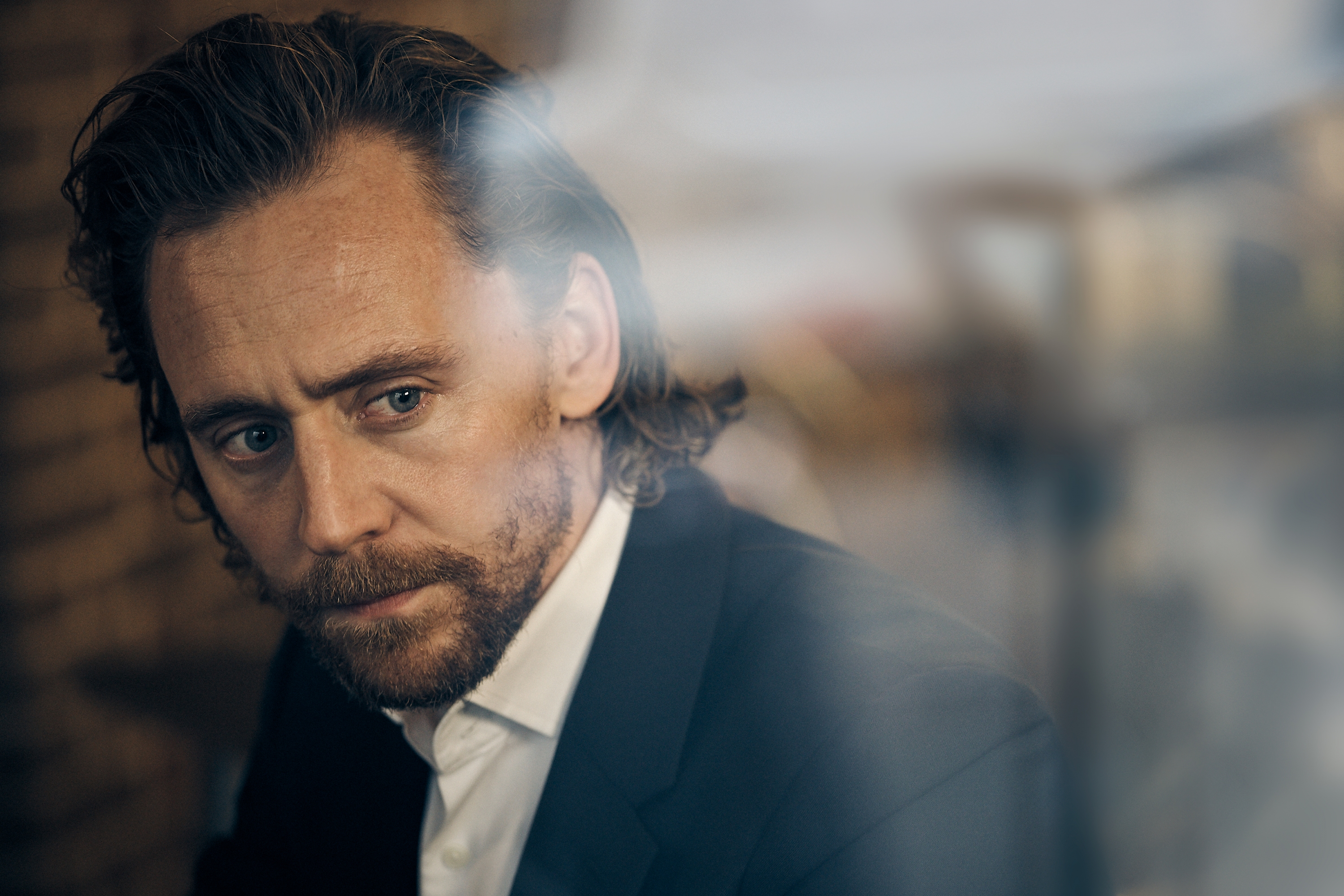 Since early March, Tom Hiddleston has been performing in Jamie Lloyd’s revival of the classic Pinter play Betrayal and will continue to do so until the first few weeks of June. Hiddleston is known to many as the infamous Marvel villain Loki; a performance that is often cited as being one of the best within the Marvel Cinematic Universe. The plot of Betrayal covers a seven-year extramarital affair between two characters, Emma and Jerry, who would often meet in secret, away from the rest of civilisation. Betrayal has received rave reviews from critics, including five-star ratings from the Independent and London Theatre Guide. 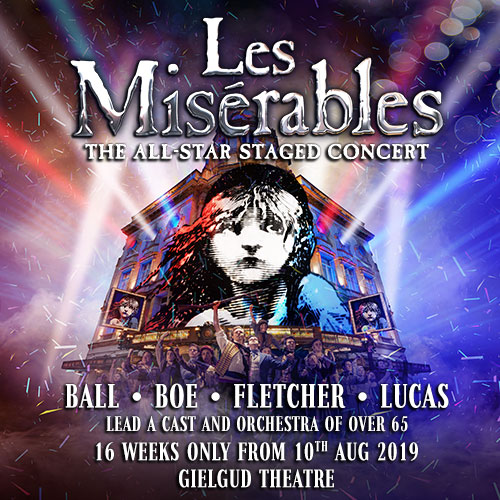 Beginning in August, a brand-new staged concert version of Les Misérables will be opening at the Gielgud Theatre, where it will remain up until the 30th of November. Alfie Boe and Michael Ball are renowned stars of the West End stage and have previously toured the nation together on a number of different occasions. In addition to this, Boe and Ball have also released two number one albums. Carrie Hope Fletcher is similarly known for her work in musical theatre, having recently played the leading role of Veronica Sawyer in the West End production of ‘Heathers the Musical’. Fletcher is also known for her career as a vlogger on YouTube, where she has garnered over 600,000 subscribers. Last but by no means least is Matt Lucas, who many will know from his role on the sketch comedy ‘Little Britain’. Adapted from Victor Hugo’s novel, Les Misérables is set against the backdrop of 19th century France, telling the tale of unrequited love, sacrifice, passion, redemption and revolution. This star-studded production of Les Misérables is likely to be something quite special, and it is therefore not to be missed! 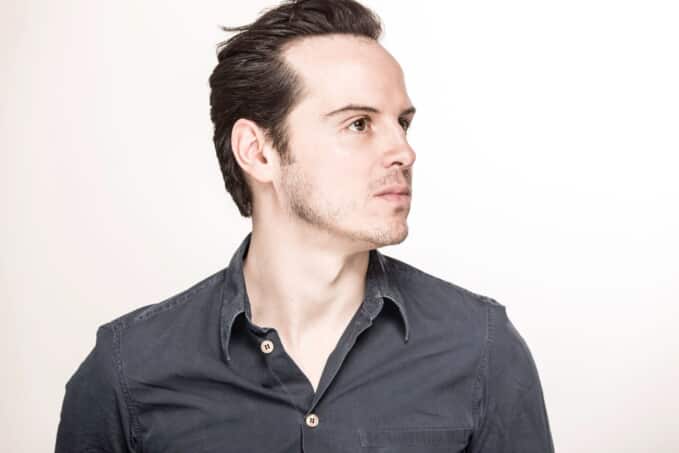 From the 17th of June until the 10th of August, Andrew Scott will be portraying the lead role of Garry Essendine in the revival of Present Laughter at the Old Vic. In 2016, Scott achieved widespread fame after playing the role of Jim Moriarty in the BBC series Sherlock. Scott’s performance in Sherlock was well and truly outstanding, and it should come as no surprise that he earned a BAFTA Award for his portrayal of the show’s leading antagonist. Present Laughter is a comedic play written by Noël Coward, that first premiered in London in 1942. Despite the play being written so long ago, director Matthew Warchus is seeking to modernise it in this new production by reversing the genders of several main roles. I am personally intrigued to see how Warchus alters the play, and I have no doubt that Andrew Scott will deliver a truly remarkable performance.

Matthew Broderick and Elizabeth McGovern in The Starry Messenger 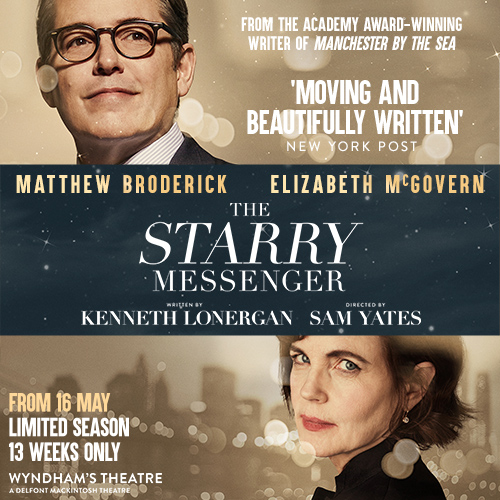 Since the beginning of May, Matthew Broderick and Elizabeth McGovern have been performing in The Starry Messenger, which is currently scheduled to play until August. Broderick has had a successful career in both film and on the stage, the latter of which he has won two Tony Awards for. His movie credits include ‘Ferris Bueller’s Day Off’, ‘WarGames’ and ‘Glory’. McGovern is a renowned film, television and theatre star, having been nominated for Academy and Emmy Awards. She is arguably most well-known for her performance in Downtown Abbey, in which she played Cora Crawley, Countess of Grantham. The Starry Messenger centres around a teacher of astronomy whose life is spiralling away from him; the planetarium he works at is set to close down, his marriage is on the rocks and he has only recently lost his Father. Despite all seeming lost, things begin to change once trainee nurse Angela enters his life. There has been a lot of hype surrounding Broderick’s West End debut, and he is unlikely to disappoint. 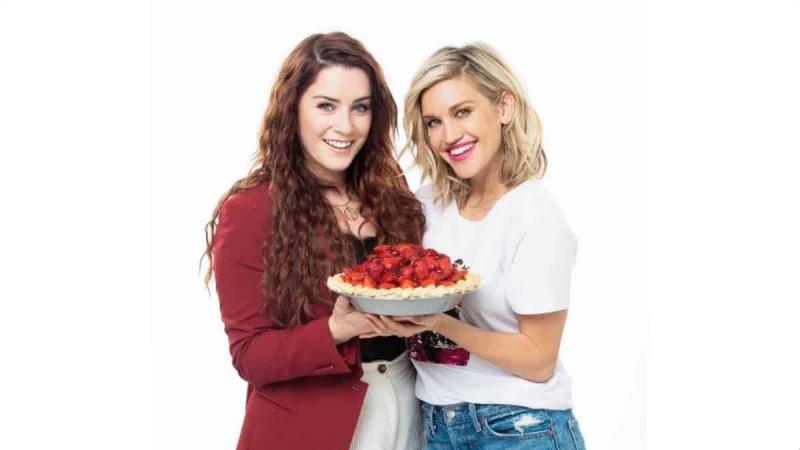 Katharine McPhee and Jack McBrayer originated the roles of Jenna and Ogie, respectively, earlier this year in the hit musical Waitress. McPhee will be departing the production on the 15th of June, whilst McBrayer will be departing at a date, as of writing, to be confirmed. In the meantime, Ashley Roberts will be taking on the role of Dawn beginning on June 17th for a limited run. Katharine McPhee is an American actress, singer and songwriter, who has achieved successful careers in both acting and singing. She has released a total of five albums and is known to many for her leading roles in ‘Scorpion’ and ‘Smash’. Jack McBrayer is an Emmy-Award nominated actor, who gained fame for his portrayal of Kenneth Parcell in 30 Rock. McBrayer also voiced Fix-it Felix Jr. in the Disney movie ‘Wreck-It Ralph’. Ashley Roberts is known for being a former member of the American pop girl group and dance ensemble, ‘The Pussycat Dolls’. She was also a contestant on Strictly Come Dancing in 2018, as well as a campmate on ‘I’m a Celebrity… Get me Out of Here!’ in 2012. Waitress tells the story of Jenna, an expert pie maker stuck in a small town and a loveless marriage. Faced with an unexpected pregnancy, Jenna hopes to achieve a fresh start through entering a baking contest in a nearby county. Waitress won several awards for its Broadway production, and received a Tony Award nomination for ‘Best Musical’. 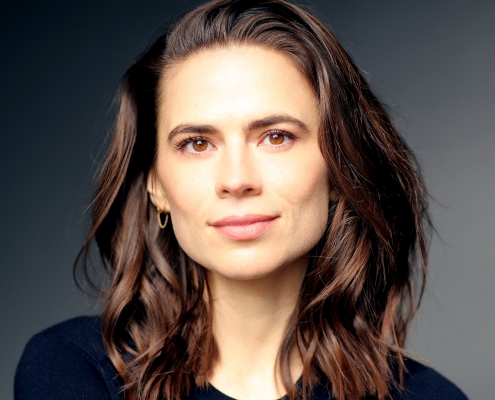 The revival of Ibsen’s Rosmersholm began performances in late April at the Duke of York’s Theatre, where it will continue to play until late July. Hayley Atwell is largely known for her portrayal of Peggy Carter within the Marvel Cinematic Universe (MCU). Atwell has portrayed Peggy in multiple movies, including ‘Captain America: The First Avenger’, and several television shows, such as ‘Agent Carter’. Rosmersholm centres around Johannes Rosmer and his free-spirited housekeeper Rebecca West, portrayed by Atwell. Both Johannes and Rebecca are haunted by the spirit of Rosmer’s wife, who passed away one year prior to the play’s opening scene. Guardian critic Michael Billington awarded Rosmersholm five stars and referred to Atwell’s performance as “breath-taking”.

Kelsey Grammer and Nicholas Lyndhurst in Man of La Mancha 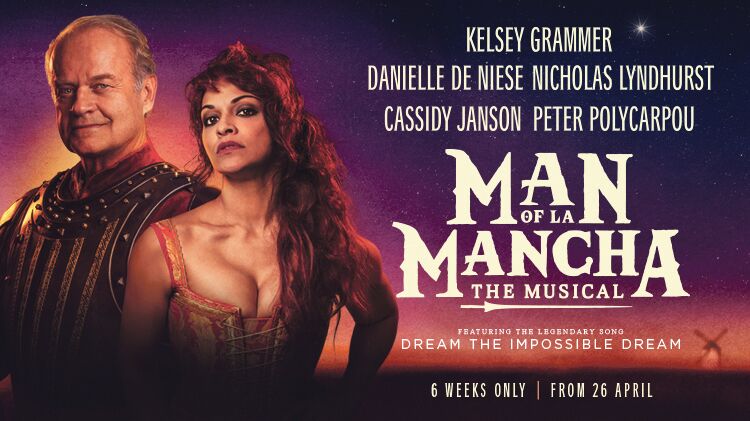 Kelsey Grammer and Nicholas Lyndhurst have been starring alongside each other in Man of La Mancha at the London Coliseum since late April, and they will continue to perform until the first week of June. Kelsey Grammer is an American actor, best known for his two-decade-long portrayal of the kind, yet pompous, psychiatrist Dr. Frasier Crane on the popular sitcoms ‘Cheers’ and ‘Frasier’. Throughout his career, Grammer was the recipient of five Primetime Emmy Awards, three Golden Globe Awards and one Tony Award. Nicholas Lyndhurst, on the other hand, is an English actor also known for his work on television. Lyndhurst’s long list of credits include Rodney Trotter in ‘Only Fools and Horses’ and Garry Sparrow in ‘Goodnight Sweetheart’. Man of La Mancha is framed as a play within a play and is loosely adapted from the 17th Century novel ‘Don Quixote’. Grammer is an outstanding performer, and it is truly wonderful witnessing him live.

Clive Owen in The Night of the Iguana 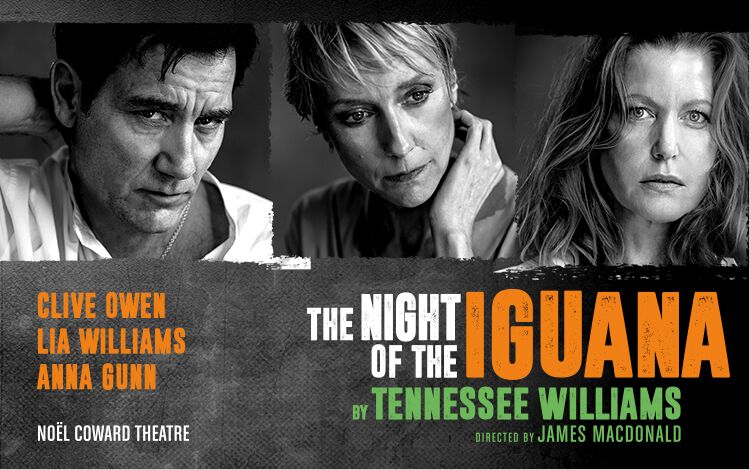 The Night of the Iguana, starring Clive Owen, is currently scheduled to begin performances in early July and play up until late September. Owen has had a prosperous career in film, theatre and television, and is known for his starring roles in ‘King Arthur’, ‘Inside Man’ and ‘Children of Men’, among others. The Night of the Iguana is set in a dilapidated Mexican hotel, and follows the interactions between a promiscuous widow, a clergyman and a spinster. The play is a Tennessee Williams classic, and was last seen in the West End in 2005. 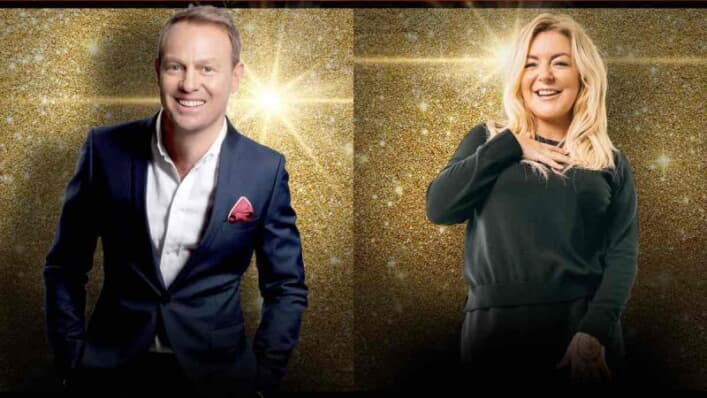 Laurence Connor’s revival of Joseph and the Amazing Technicolor Dreamcoat will be opening at the London Palladium in late June, with Jason Donovan and Sheridan Smith taking on leading roles. Jason Donovan is an Australian actor and singer, who first came to prominence in the Australian soap ‘Neighbours’. Donovan later went on to launch a career in music and, in addition to this, has appeared in several shows in London’s West End. Donovan played the leading role in Joseph in the early 1990’s and is now returning to the show, this time portraying Pharaoh. Sheridan Smith has had a successful career in both television and theatre and has won multiple awards. There are many who will know Smith through her appearances on several sitcoms, such as ‘Two Pints of Lager and a Packet of Crisps’ and ‘Gavin and Stacey’. The musical is based on the Biblical story of Genesis, which tells of Joseph being sold into slavery by his brothers and features classic songs such as “Any Dream Will Do”, “Close Every Door” and “Go, Go, Go Joseph”. This production commemorates the show’s 50th anniversary and will likely be quite spectacular.