The Most Successful Musicals of the Past Decade

Since the early 20th century, musical theatre has often been considered central to the West End. Throughout the past decade, approximately a dozen new musicals have been produced for the stage each year. London’s West End is never short of these treasures, and there are always plenty to choose from. Theatreland is a competitive industry, however, and as a result some do end up being more successful than others. So, without further ado, here are some of London’s most successful musicals that have opened within the last decade.

Based on the 1988 children’s novel by British novelist Roald Dahl, Matilda the Musical took the West End by storm when it first opened in 2011. The show centres around young Matilda, a 5 year-old-girl with extraordinary intelligence and unusual powers, overcoming the obstacles of life created by her family and school. It was adapted by Dennis Kelly, and features a musical score written by Australian comedian and composer Tim Minchin.

When it first opened, Matilda received universal acclaim and played to sold-out audiences. I myself can remember having to queue over an hour for tickets as a result of its popularity. The show would later go on to win a grand total of 7 Olivier Awards, including the highly prestigious award of ‘Best New Musical’. The show then went on to transfer to New York’s Broadway, where it received equal praise and won 4 Tony Awards.

One argument for the Matilda’s success could be its brilliant musical score. With instant classics such as ‘When I Grow Up’, both the music and lyrics are remarkable. The show’s book, by Dennis Kelly, is also worthy of equal admiration and, deservedly, garnered the show one of its four Tony’s. The story is exceedingly heart-warming and is likely to leave many audience members teary-eyed. Matilda has near-universal appeal; it is a show to be enjoyed by the whole family.

The Book of Mormon is a hit musical comedy that first opened on Broadway in 2011, before making its way to London’s West End two years later. The show follows two young and naïve Mormon missionaries in their quest to preach their religion to the inhabitants of Uganda. The people of Uganda, however, have no desire to join the faith, and are instead focused on the more pressing issues facing them, such as famine and village warlords.

The critical reception for The Book of Mormon was overwhelmingly positive for its initial run on Broadway and broke a number of box office records. It then won an astonishing 9 Tony’s, including both acting and creative awards. Following its success in New York, the producers took the decision to transfer it to London’s West End, where it became an instant hit and went on to win the Olivier for ‘Best New Musical’. The show continues to play to sold-out theatres in both New York and London; it is a true success in every sense of the word.

Described by the Daily Telegraph as being “wickedly funny”, The Book of Mormon has received commendation for its crude and shocking humour. The show sets out to surprise and alarm its audience, which certainly sets it apart from other Broadway and West End musicals, and may be as to why it has been so successful. 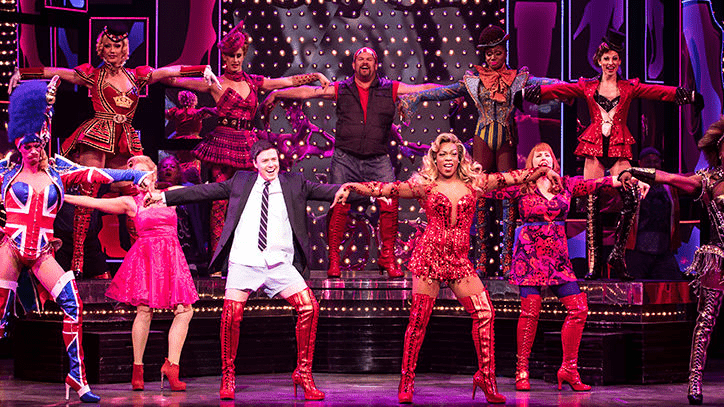 The successful musical comedy Kinky Boots is based on the 2005 British film, and was largely inspired by real-life events. After having inherited a shoe factory from his father, Charlie Price forms an unexpected alliance with drag queen Lola (A.K.A Simon), and the two go into business with each other. Producing a line of high-heeled boots, the two aim to save the business from bankruptcy, and look glamorous whilst doing so. The show was adapted by award-winning actor Harvey Fierstein, and has a musical score composed by Cyndi Lauper.

When it first opened on Broadway in 2013, Kinky Boots received a mixed reception from critics and was struggling at the box office. Despite this, it soon emerged as an underdog at the Tony Awards, and came out victorious winning an unprecedented 6 awards. After this particular event, it received a post-Tony boost in sales and became extremely popular. As a consequence, producers took the decision to transfer it to London’s West End, where it played for a total of four years and supplied over 1,000 performances. The production closed in January 2019, but has since begun touring across the United Kingdom.

Kinky Boots had an incredibly touching and relatable story, which is likely as to why it became so admired by New York and London theatregoers alike. It was an excellent piece of theatre, and I hope to see it return to the West End at some point within the future. 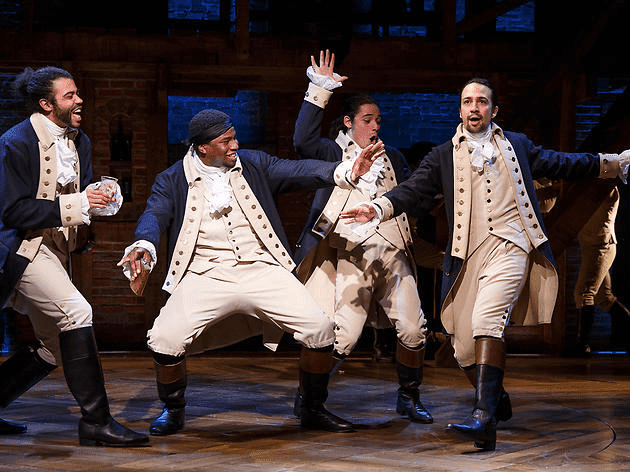 Hamilton, with music, lyrics and book by Lin-Manuel Miranda, has been a worldwide phenomenon. The show is entirely sung and rapped through and tells the life story of American Founding Father Alexander Hamilton. The musical score incorporates a number of different musical genres, including hip-hop, R&B, pop, soul and traditional-style show tunes. The show also contains colour-conscious casting, featuring non-white actors as the American Founding Fathers and other historical figures.

Hamilton first opened Off-Broadway in 2015, where it remained completely and utterly sold out throughout the entirety of its run. The show would later transfer to Broadway, where it received an overwhelmingly positive reception. It went on to receive a record-setting 16 Tony nominations and was the recipient of a Pulitzer Prize for Drama, as well as a Grammy Award for Best Musical Theatre Album. Catching on to its success, Cameron Mackintosh produced a West End production of Hamilton in late 2017. London theatregoers have welcomed Hamilton with open arms, and it has been just as popular here as it is in the States. At the 2018 Olivier Awards ceremony, it tied Matilda’s record for most awards won by any musical throughout history.

There is truly no other musical like Hamilton, and that’s what makes it so special. The inventiveness and creativity within the show is remarkable, and it is more than deserving of all the praise that it has received. I am confident that it will be in London’s West End for many years to come.

Most Successful Plays of the Past Decade
Scroll to top