Bond Street is synonymous with luxury shopping in the West End. Running adjacent to Oxford Street, Bond Street is its classier, wealthier sibling but no less famous or over brimming with choice. Among the tall mix of Georgian, Victorian and Edwardian architecture, giant flags hang outside glass-fronted stores bearing the names of the finest fashion creators on the planet. There’s a sense of grandeur to this street that appeals to a global demographic.

Technically two streets, Old Bond Street and New Bond Street, the entire stretch is around half a mile long (about 0.8 kilometres). It is rumoured to have the highest concentration of haute couture in such a space anywhere in the world. New Bond Street commands the second highest rents of any retail space on the world, second only to Fifth Avenue in New York, but it is also one of the fastest growing shopping destinations with a promising future to continue to attract the world’s best luxury maisons. 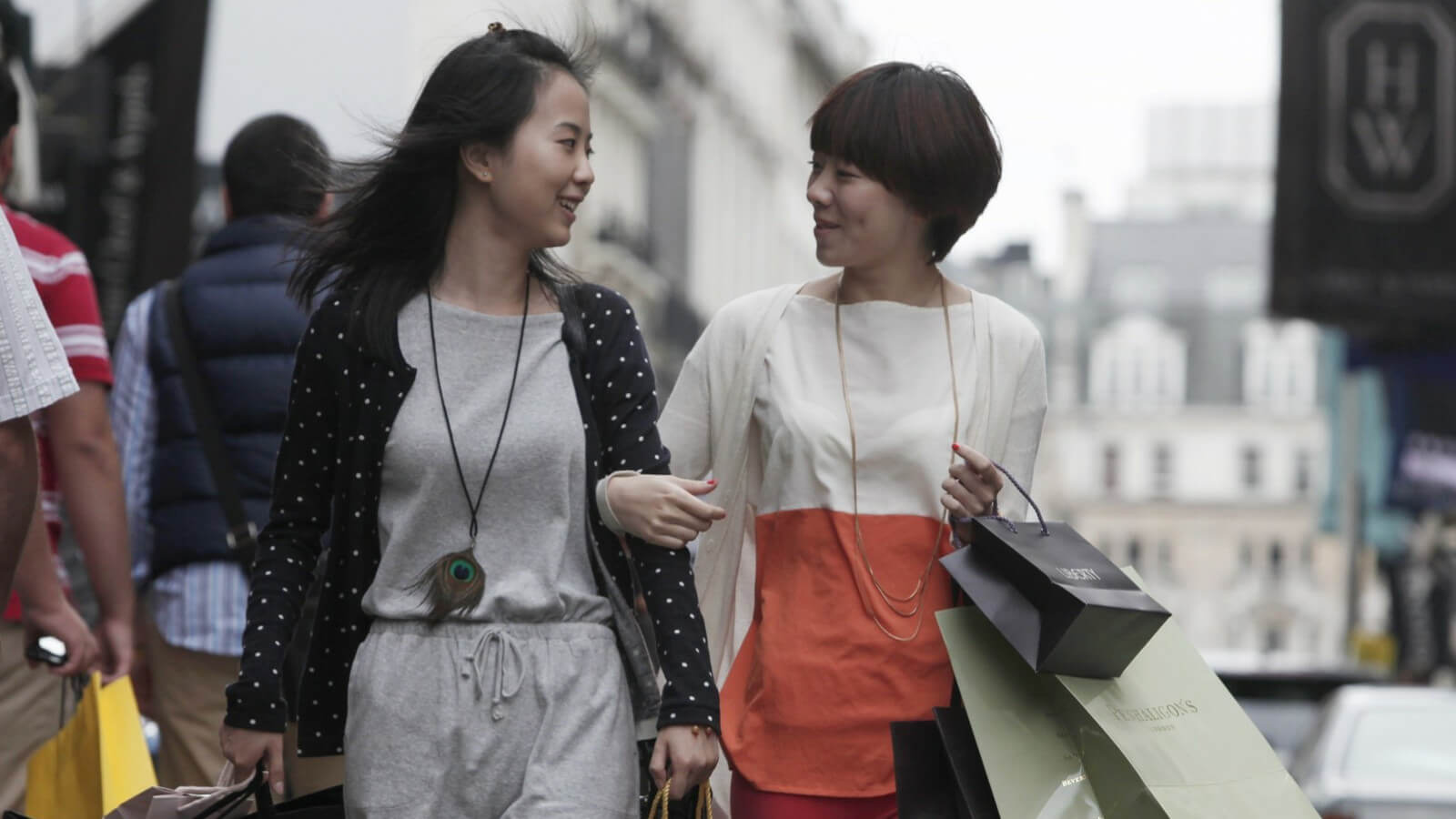 Up until the late 17th century, the land behind Piccadilly was mostly green fields owned by the mansions that lined it. When a developer, named Sir Thomas Bond, bought one, he had bigger plans to turn it into an area that could be enjoyed by the wealthy neighbours surrounding it. It was an instant hit. The entire of Mayfair was being developed at that time and those in high society wanted to be a part of this trendy new part of town, whether to live or to socialise. There were invariably a lot of fashionable men and women spotted on the street, as noted in a number of journals from the time, and Bond Street’s relationship with style began. It was busier than its neighbouring streets too as it connected Piccadilly with Oxford Street, making it a prime spot for tailors, chocolatiers, wigmakers and art dealers to move in.

Some of the most famous trend-setters frequented Bond Street, securing it a reputation that remains to this day. In 1784, the beautiful and highly political Duchess of Devonshire called for a boycott of shopping in Covent Garden after its residents voted against her favoured candidate, suggesting people take their business to Bond Street instead. The infamous dandy Beau Brummell was also a regular who didn’t just buy but dictated what the retailers would sell. As such it’s always been the destination for fictional characters in high places too. The street is mentioned in Jane Austen’s Sense and Sensibility as the shopping trip of choice for Marianne and in Mrs Dalloway by Virginia Woolf as Clarissa prepares for her party.

The fashionable types who use to stroll the street purely to be ‘seen’ became known as the Bond Street Loungers and while they did not cause any major disruption, they were generally disliked for being posers. As other parts of the city became fashionable, the Loungers soon moved on and its association with socializing diminished but its reputation for shopping continued.

A few minor developments to the street, such as the edition of the Royal Arcade in 1879 which meant the Clarendon Hotel, a longtime fixture since the street’s early days, disappeared making way for even more shopping. London and the West End has been through many changes since Bond Street first appeared in the 1720s but the road’s luxury appeal as the most desirable shopping destination around has never faded. 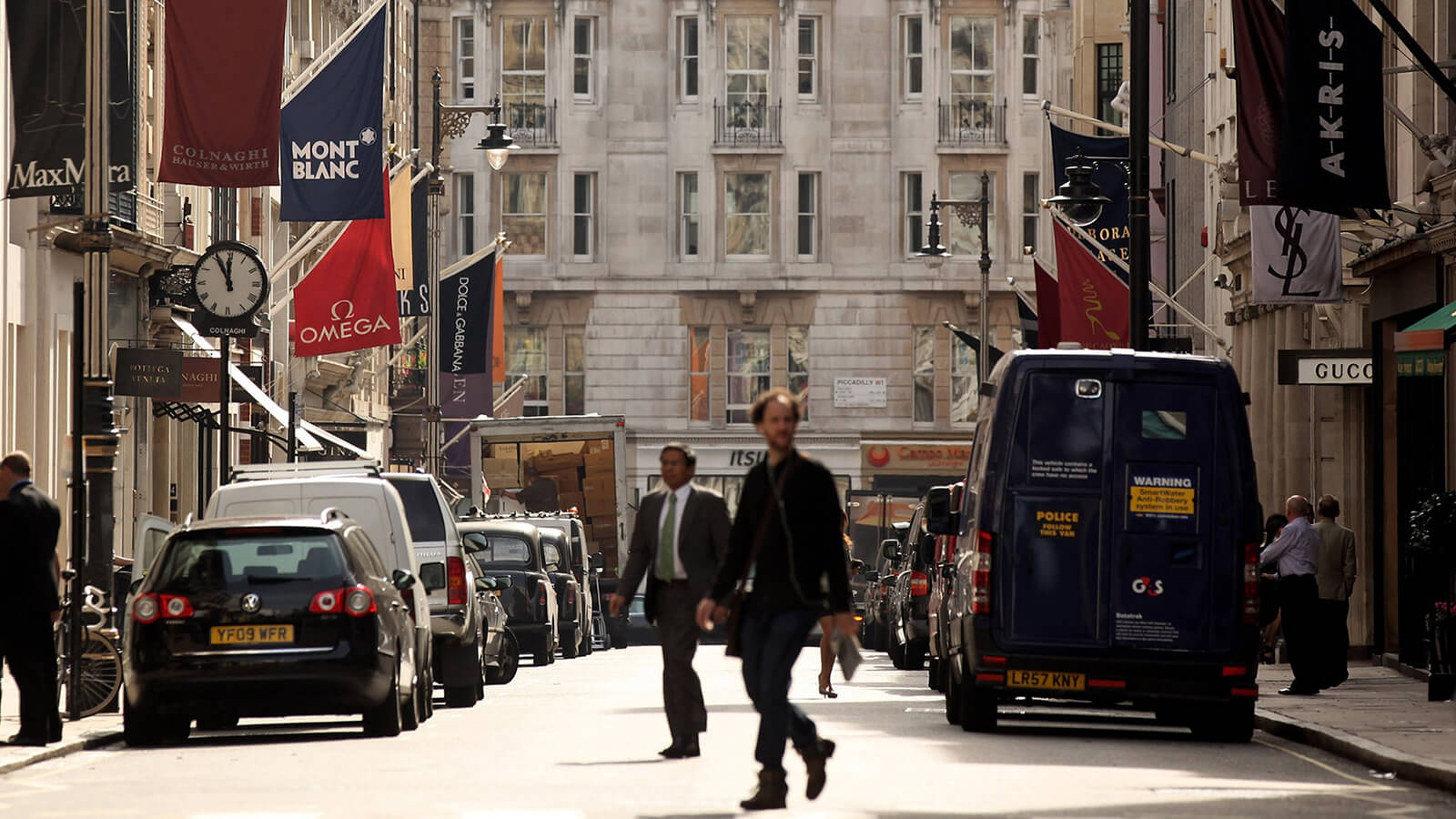 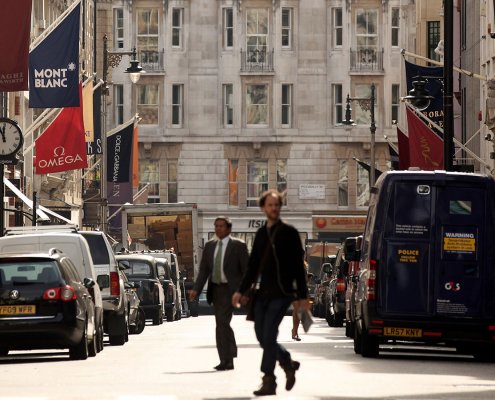 A street that has this much history, has gathered a certain number of memorials and interesting artefacts along the way. If you can tear your eyes away from the elaborate shop window displays for a moment, you may just notice something you haven’t seen before.

One of the most famous landmarks along Bond Street, and one that always makes for a good photo opportunity, is a statue of a bench with two figures sitting on it. Titled ‘Allies’ the two figures depict Winston Churchill and Franklin D. Roosevelt whose strategic friendship helped them to win the Second World War. There’s also a little space on the bench for tourists to sit and pose with them too. It is cast in bronze by sculptor Lawrence Holofcener who, aptly, holds both American and British citizenship. It was unveiled in 1995 by Princess Margaret to commemorate 50 years since the end of the war.

At 147 New Bond Street you’ll see a blue plaque on the wall marking the residence of Lord Nelson, one of the many prestigious names who lived on the street. Nelson was a resident here in 1797, just eight years before he was killed at the Battle of Trafalgar.

Outside the Sothebys Auction House above the door is London’s oldest outdoor statue. The lion bust is a depiction of the warrior goddess Sekhmet and is an original Egyptian artefact dating from 1320 BC. It was originally brought in for auction and was sold but the buyer never turned up to buy it. 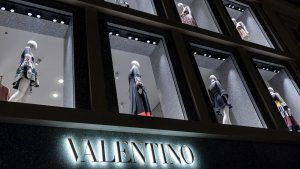 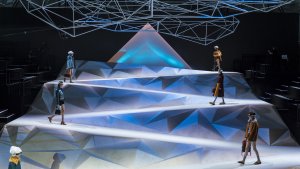 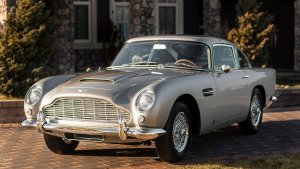 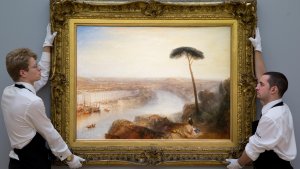 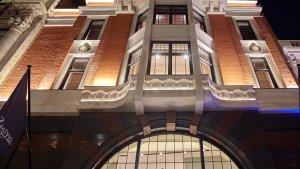 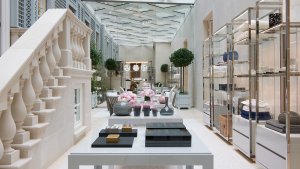 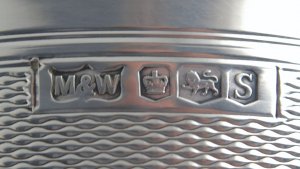 Bond Street isn’t full of the shops that you need in your life, but it is full of the most beautiful things you could ever want. Almost every luxury maison you can think of has a flagship store here and there’s always a fashion party happening in one of them on any given night of the week. From collectable art work to engagement rings to couture eveningwear, only the very finest is traded on Bond Street.

Bond Street doesn’t sell fashion, it is fashion. From the range of brands on offer to the stylishly dressed clientele and the extravagance of the stores, it’s easily one of the most glamorous streets in the world. As such, you’ll find the best fashion from across the big four fashion capitals right here.

All of France’s iconic fashion labels have a presence on Bond Street: Chanel, Louis Vuitton, Dior and Saint Laurent. You’ll also find a little French heritage in Hermès and the ultimate brand to help you nail Parisian cool, Chloe.

Bringing their always-fresh take on luxury from across the Atlantic, America is also represented with the likes of Ralph Lauren and Tory Burch.

Of course, it wouldn’t be London without a strong representation of British brands. Stella McCartney bring sustainable luxury and tailored womenswear to Bond Street while Burberry brings the best of British heritage with its signature check and trench coats and Temperley offers boho style with a premium finish. Anya Hindmarch has become a modern favourite for her playful take on accessories, while Mulberry take on craftsmanship has a graceful air to it. Britain’s footwear heritage is also represented at Church’s, who make some of the best quality shoes, and at Jimmy Choo, who make some of the most fashionable.

If you’re in the market for diamonds, you’ve come to the right place. Bond Street shoppers love their jewellery and watches as much as they love their fashion. Whether it’s a gift for yourself, a present for a loved one or you’re looking to find the perfect engagement ring to pop the question, Bond Street brings the biggest names in the business together on one street.

When it comes to classic fine jewellery, the likes of Cartier, Tiffany and De Beers are the experts in selling heirlooms that can be passed down for a generation. If you prefer your jewels with more of a high-fashion twist, Chanel has a separate jewellery boutique on New Bond Street and Bulgari is the perfect stop for those following in the footsteps of Elizabeth Taylor.

Watches make a truly luxurious statement in the 21st century and you’ll be spoilt for choice amongst the specialists of Bond Street. If you know the brand you love, there are standalone boutiques for Piaget, Rolex, Breitling and Jaeger-LeCoultre. However, if you want to browse a selection and compare their craftsmanship side by side, Mappin & Webb has a strong selection of new and pre-owned models, as do Watches of Switzerland with a particular strong collection of Rolex and Patek Philippe. 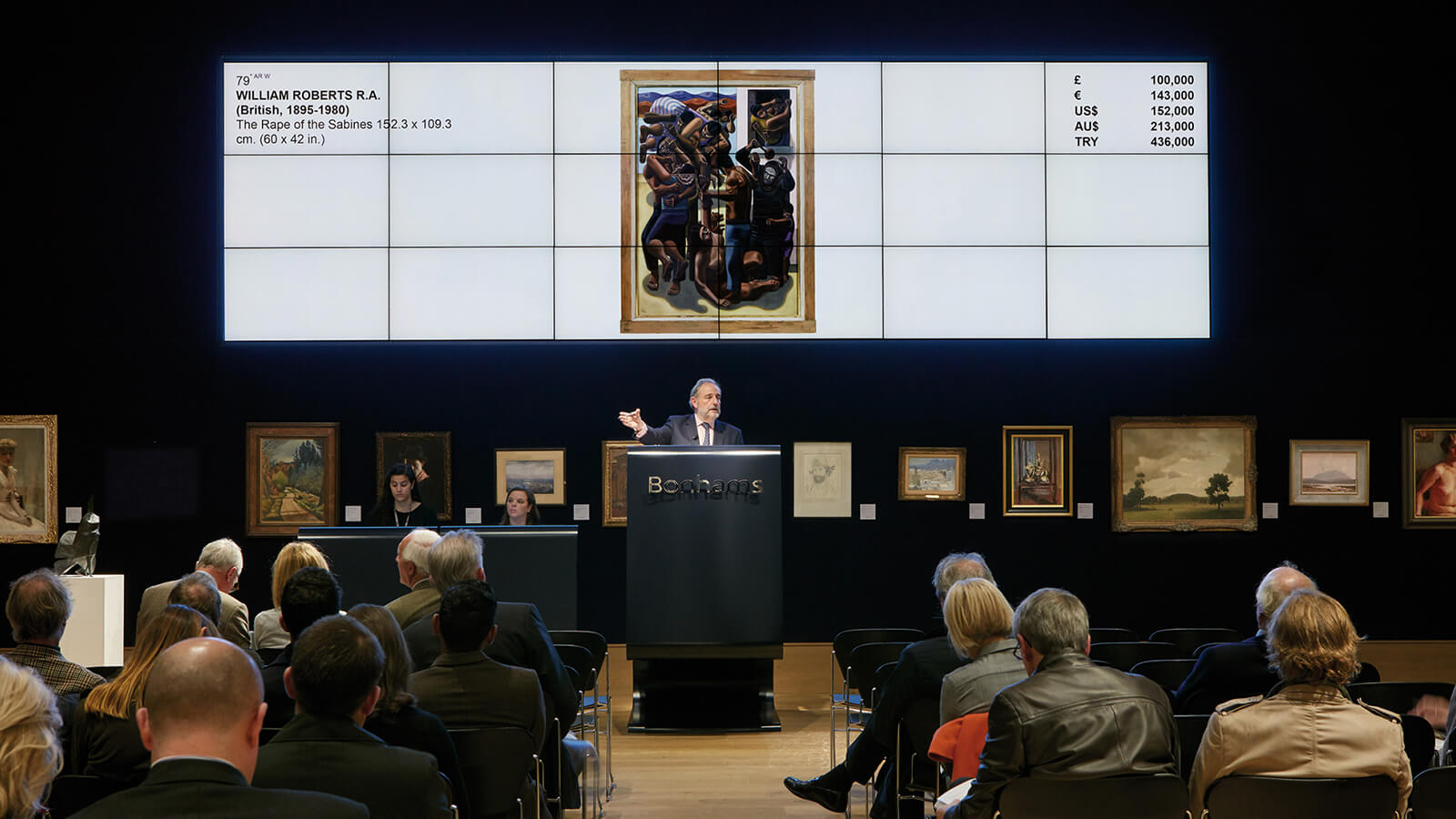 Bond Street has long been known for arts and antiques and today two of the UK’s biggest auctioneers remain on the street, Bonhams and Sotheby’s.

At number 101 New Bond Street, Bonhams has a reputation that has far exceeded its London birthplace with flagship salerooms in New York, LA and Hong Kong too meaning they now host over 400 specialist sales a year. Founded in 1793, they deal in fine art, furniture, jewellery, books, wine and whisky, cars, property and much more. Their New Bond Street headquarters has been truly brought into the 21st century and Bonhams prides itself on appreciating the old and the new.

Its rival, Sotheby’s, can be found at 34-35 New Bond Street. Founded a little earlier in 1744, it also began life in London but is now headquartered from New York where it is the oldest company on the New York Stock Exchange. They have additional salerooms in Hong Kong, Paris, Dubai, Doha, Zurich, Geneva and Milan. Specialist sales happen around the year in art, wine, rugs and carpets, jewellery and watches, cars, property and more.

Since 1891, Fenwick of Bond Street has stood proudly on the street as its only department store. The business was started by John James Fenwick in Newcastle in 1882 but quickly began to grow his family business with his son and today they have nine stores across the country. Bond Street was an obvious choice for the second outpost as it mirrored their commitment to luxury. The company has been handed down through generations and remains the only family-run luxury department store in London. Selling a carefully curated mix of beauty, womenswear, menswear, food and gifts, this historical store stands up to the test of modern times. Brands stocked across the five floors include Calvin Klein, Dunhill, Emilio Pucci, Hugo Boss, Jo Malone, Rebecca Minkoff and Tory Burch. You’ll also find services including personal shopping for men and women, bra fitting and a delivery of your shopping bags to your home. There are plenty of beauty treatments to indulge in at Fenwick too including a Blink brow bar, a Clarins skin spa, Radio London hair salon and a Nails Inc manicure bar. 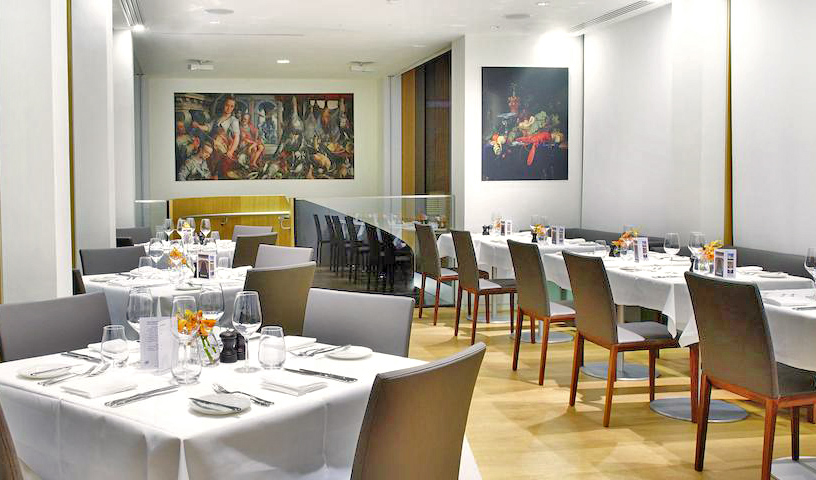 While the surrounding area has an overwhelming choice of hotels and restaurants to dine at, you won’t find much along Bond Street itself. At least at first glance. Tucked away in the auction houses and department store are cafes and restaurants that are sure to refresh you while still being very much a part of the Bond Street experience.

The Bonhams Restaurant is far more than just a place to eat at one of the oldest auction houses in the world, it’s earned itself a Michelin star. In a minimalist and modern setting, this restaurant is quite underrated and rather than being the ‘it’ place of the moment, focuses on what really matters when it comes to your meal. Excellent service is met with a menu of seasonal, modern European cuisine with a particular focus on fish and seafood. The wine list is just as impressive, sourced by Bonhams’ own wine specialist who spends the rest of his time working at auction.

For something more relaxed, head to rival auction house Sotheby’s where the café serves up breakfast, lunch and afternoon tea. It’s the type of place where you’re like likely to see people from the art world talking business over lunch, or Bond Street regulars dropping in for a cappuccino in between shops. Both the décor and the menu are traditional with the likes of scrambled eggs and smoked salmon for breakfast, a lobster club sandwich for lunch and plenty of scones at afternoon tea.

Every good department store has an excellent restaurant inside it and Fenwick is no exception. Bond Street Kitchen is a quiet space on the second floor to enjoy contemporary British dishes and delectable wines. The atmosphere is casual but fashionable with photography worthy of a Vogue cover on the walls. A children’s menu is available for under 12s as is a classic afternoon tea perfect for an occasion.